Architecture and Applications of Drones for Precision Agriculture and Environmental Monitoring
by Luca De Vito
Department of Engineering, University of Sannio, Italy 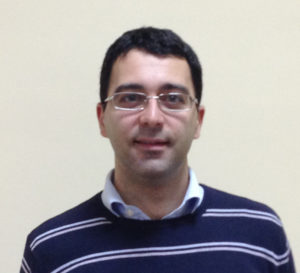 Abstract
Unmanned Aerial Vehicles (UAVs) are becoming popular as carrier for several sensors and measurement systems, due to their low weight, small size, low cost and easy handling, which make them flexible and suitable in many measurement applications, mainly when the quantity to be measured is spread over a wide area or it lies in human-hostile environments.
The tutorial will introduce the architecture of the drone, by highlighting its subsystems and the parameters that can influence the on-board sensors and measurement systems.
Then, some measurement applications for precision agriculture and environmental monitoring will be presented and an overview of the main sensors used in these applications will be given.
For some of these applications, aspects related to the calibration and uncertainty will also be faced. In particular, it will be shown how the measurement of the position and attitude of the drone can affect the final measurement result.

About the Lecturer
Luca De Vito received the master’s (cum laude) degree in software engineering and the Ph.D. degree in information engineering from the University of Sannio, Benevento, Italy, in 2001 and 2005, respectively. His master’s thesis was on automatic classification and characterization of digitally modulated signals. He joined the Laboratory of Signal Processing and Measurement Information, University of Sannio, where he was involved in research activities. In 2008, he joined the Department of Engineering, University of Sannio, as an Assistant Professor in electric and electronic measurement. He received the National Academic Qualification as an Associate Professor and as Full Professor, in December 2013 and in August 2018, respectively. Since 2015, he collaborates with the European Organization for Nuclear Research (CERN), Geneva, Switzerland, first as visiting scientist, and then as cooperation associate, working on magnet characterization, with the Magnetic Measurement Section (TE-MSC-MM), on diagnostics of cryogenic processes, with the Controls and Electrical Support Section (TE-CRG-CE), and on the characterization of RF cavities with the Hadron Synchrotrons Coherent effects Section (BE-ABP-HSC). Since June 2016 he is associated to the National Institute of Nuclear Physics (INFN) and collaborates to the ELI-NP (Extreme Light Infrastructure – Nuclear Physics) project.
He is Editor of the ELSEVIER Measurement journal.
He is member of the IEEE since 2010, he is member of the IEEE Instrumentation and Measurement Society (IMS), of the IEEE Aerospace and Electronic System Society, and of the IEEE Standards Association. He is Senior Member of the IEEE since 2012. He is Chapter Chair Liaison of the IEEE IMS.
He is member of the AFCEA and is Young President of the AFCEA Naples Charter.
He published more than 110 papers on international journals and conference proceedings, mainly dealing with measurements for the telecommunications, data converter testing and biomedical instrumentation.