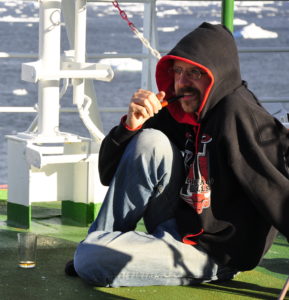 Abstract
The characterization of ecological niches is an essential requisite to the understanding of species ecology and physiology, and to project responses under the scenarios of environmental changes. The measure of climatic envelope rarely matches realistic species dimensions, missing to target the biological components by several orders of magnitude. At the same time, the vast majority of studies that aim at building the physiological-knowledge base for projecting climate change impacts investigating the sensitivity and vulnerability of species, are based under essential laboratory conditions. However, these eco-physiological responses need to be validated under realistic environmental conditions to include the stochastic variation of climate and the interactions among the different elements within the community.
The mismatch between climatic measurements and biological dimensions occurs across size, space and time, highlighting the need of downscaling our perception not only to snap the actual niche of a species but also to estimate its capacity to acclimatize and adapt to changes. This contribution will present few theoretical pitfalls of biological-relevant environmental measures paralleled by experimental studies on terrestrial and aquatic species with the aim to stimulate the discussion within an interdisciplinary community and to overcome these gaps in environmental measurements and their applications.

About the Invited Lecturer
I have a degree in Natural Sciences, obtained at the University of Genova (Italy), and a PhD in Evolutionary Biology, obtained at the University of Padova (Italy). In 2007 I moved to the Alfred Wegener Institute in Bremerhaven (Germany) to pursue my research interest in animal eco-physiology and mechanistic analyses. The collaboration and traineeship in such fertile research institute gave me the opportunity to specialize as a thermal biologist and address different theoretical questions to various research topics. I had the opportunity to investigate the adaptive mechanisms involved in the evolution of terrestrialisation, using terrestrial and semi-terrestrial crabs as model organisms; the temperature related performance and acclimation ability in Antarctic and sub-Antarctic amphipods; the mechanisms behind thermal tolerance in freshwater gastropods inhabiting thermal spring and how acute climatic events, such as the heat waves, affect early life history stages of highly tolerant eurythermal species.